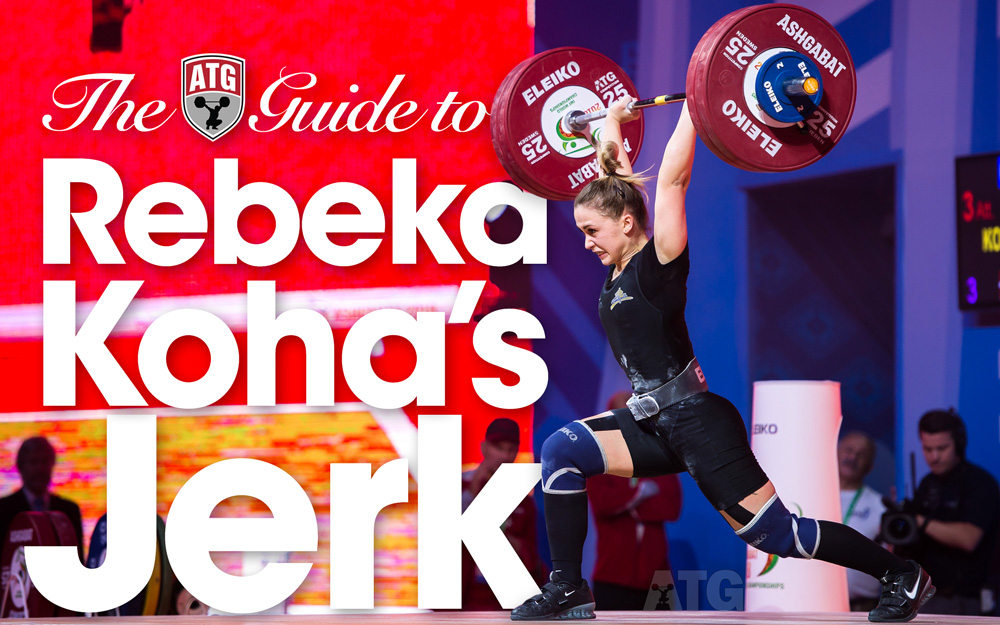 As part of an ongoing effort to provide high quality Olympic weightlifting content, we here at ATG headquarters are going to spend some time analyzing one of the best jerks around: that of Rebeka Koha.

Not only that, to learn more about her approach we went straight to the source, talking with Koha herself and her coach Eduards Andruškevičs. They generously donated their time answering our questions and explaining why—despite professing our love for her jerk and even sending a mixtape we worked really hard on—it was really better off if we and the jerk remained just friends, for now. Le sigh…

But who doesn’t love Koha’s jerk? In a recent poll of leading art historians and museum experts,* respondents were asked what works of art they would save if the world were about to be destroyed to make way for a hyperspace bypass. While there was some disagreement over the particulars, the following works appeared on everyone’s list: Leonardo da Vinci’s Mona Lisa, Michelangelo’s David, and Rebeka Koha’s Jerk.

If they had to further narrow the list to only one work, all were unanimous that while they could probably get a decent copy made of the painting or the sculpture, Koha’s jerk was irreplaceable, and thus the only thing truly worthy of preservation.

We couldn’t agree more. Koha’s jerk is one of those rare beauties that comes along once in a generation, inspiring men and women alike to fall hopelessly in love and start writing bad poetry while listening to sad songs from the 1990s.

Where were we… Right! What we learned talking with Koha and Coach Eduards. We’re getting there now. But first, a little caveat:

Take a good, long look in the mirror. Is this what you see?

No? In that case, you may want to modify your expectations. We do not intend to offer a “How To” guide to fix your jerk. There is no such thing, at least not by any reputable source.

Reading this will not magically make your jerk replicate Rebeka Koha’s. Were that possible, I would be out winning weightlifting competitions rather than writing articles about them.

Koha’s jerk is the product of a variety of factors: her genetics, her training, her excellent coaching, her nutrition (lots of chicken, apparently), and a certain je ne sais quoi factor that (seriously) is largely the domain of top tier athletes, and contributes to the other factors being so successful.

But I digress. The point here is not to promise the impossible. The point is to appreciate the technical factors that make her jerk look so incredibly good—and maybe to then consider what may be of use to the rest of us mere mortals. Let’s consider three elements they talked about, for simplicity’s sake:

Both Koha and her coach (independently) mentioned this, or some variation of it.

Essentially, the core and all of its muscles remain tight, which is something to keep in mind the next time you see a jerk attempt by an athlete whose torso looks like cooked linguine. If the back is relaxed then there is a likelihood of the athlete dipping forward, allowing the chest to drop. The result is a loss in stability, and the risk of pushing the bar forward (or the bar falling off the chest).

Importantly, the elements of the body must also be connected. Thighs, hips, and shoulders are all linked in a line and all of them contribute to the athlete’s stability in the dip and drive phase of the jerk, which must be straight up and down.

If you’ve ever seen Eduards point to Koha’s hips, stomach, and elbows, this is the concept he is emphasizing. The body must be straight at the moment of initiating the jerk, and everything needs to be connected and rigid. With the back tight and the dip straight, the athlete is in a better position to drive the bar up and back behind the head.

To develop the strength and rigidity in the torso necessary to maintain this position, Eduards mentioned front rack holds with a slight dip (and in particular discussed using them for Ritvars’s training).

As an interesting aside, he also mentioned seeing other teams—e.g., China—using this in training. It’s possible that Eduards was employing front rack holds long before he saw Tian Tao doing them with a small house, but his mention of Team China underscores a good coach’s willingness to acknowledge the ability to learn and benefit from others’ programs.
Rebeka doing Front Rack Holds with 150kg and 200kg!

For this, Eduards talked about the importance of complexes. In his view, the goal is to make the execution of the jerk more difficult for the athlete in training (which translates to better results in the competition, when it’s just one clean before the jerk). Some examples he mentioned included:

Finally, this training is work that must be done every day—consistency is the key to maintaining her technique and improving it even more (if that can be believed). For many weightlifters who love snatching and cleaning, training the jerk is like flossing: we know we should do it more often but rarely follow that advice until the night before the  competition. It’s too late by then! So next time you’re thinking of skipping your jerk work, just imagine a disappointed Koha and Eduards shaking their heads at you…

By setup I don’t exactly mean the technical position of the body, although that’s certainly important. Rather, I mean the work that comes before the jerk (setting her up for the jerk), and which can mean the difference between a made or missed lift.

In Koha’s case, Eduards mentioned that she sometimes lets the barbell crash on her during the clean. This results in a mistimed bounce/ascent out of the bottom, wasting valuable leg strength. Eduards’s goal is thus to improve the reception of the bar, making the jerk that much easier.

Essentially, if you clean it easily, you are setup in a better position to jerk it easily. Not everyone is from North Korea and can make a jerk after a clean that looks like an extinction-level natural disaster. Nor would anyone want to, I’m guessing… Instead: focus on a solid clean and recovery position and help make the jerk easier.

And that’s it! Take those three ingredients, throw them in a pot, add some broth, a potato, and you’ve got yourself a  world class jerk. While it may sound a bit difficult at first, take comfort in knowing that it’s still easier than figuring out the IWF’s Olympic qualification policy.** And now, back to writing poetry to Koha’s jerk…

Shall I compare thy jerk to a summer’s day?
Thy lifts are more lovely at any weight:
Heavy loads can cause others’ limbs to sway,
But beneath the kilos thou stayest straight.
Sometimes too heavy’s the bar on our chest,
And often our muscles are too relaxed,
And we lean forward, knowing it’s not best,
With soggy dips, hopes for success are axed.
But thy straight posture shall never bend,
Nor lose the connection from hips to thighs,
Nor shall the link from shoulders to hips end,
When lifting under watchful Eduards’s eyes.
So long as you make lifts, and judges see,
So long will judges give white lights to thee.

** Which, coincidentally, was the first thing the sampled art historians and museum experts said should be relegated to the dustbin of history, should the opportunity to do so arise.